Extending the TT brand to the dirt. 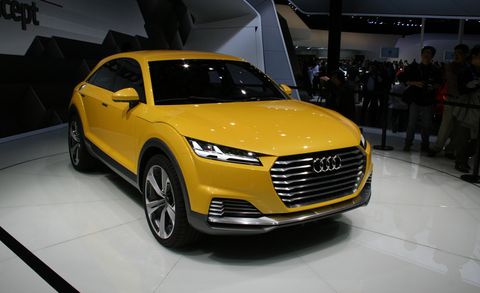 Prior to revealing this TT Offroad concept at the Beijing show, the Allroad Shooting Brake concept appeared at January’s Detroit auto show to preview the third-generation TT. So what? Well, Audi is serious about expanding the TT family beyond the coupe and the roadster models, and our sources indicate that the company is seriously considering both for production.

This particular show property is, of course, an off-road vehicle in name only. Audi says its all-wheel drive functionality is really designed for “slippery roads and light off-roading.” So don’t take it mudding. It would do far better on-road, thanks to a sophisticated plug-in hybrid powertrain that delivers a total of 408 horsepower and 479 lb-ft of torque. The system’s heart is a 2.0-liter TFSI from the EA888 engine family; it is mated to a six-speed wet dual-clutch automatic. A 54-hp electric motor lives up front, and another 114-hp motor sits at the rear axle. In full EV mode, the Audi uses the rear motor only; Hybrid and Sport modes utilize all three power sources, and all-wheel-drive traction is applied as needed.

The TT Offroad Concept can reach 62 mph in 5.2 seconds; top speed is governed at 155 mph, and fuel consumption is rated at 123.8 mpg in the (largely useless) European cycle for plug-in hybrids. Thirty-one miles can be handled on electric power alone before the liquid-cooled lithium-ion battery pack is depleted. Recharging takes place via cable or through induction, a novelty the company calls “Audi Wireless Charging.” 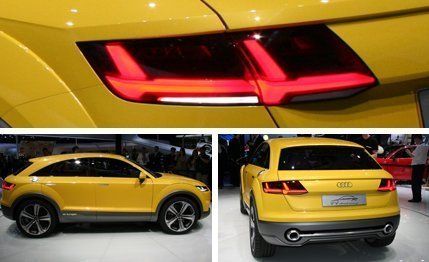 The TT Offroad Concept stands on a 103.5-inch wheelbase; it is 72.8 inches wide, 172.8 inches long, and a whopping 60.2 inches tall. With four side doors and an enlarged cabin, it offers far more room for the two rear passengers than the regular TT. The concept stands on 21-inch wheels and 255/40 rubber and is based on the VW Group’s MQB platform. The suspension thus features struts up front and multiple links out back. The body is built atop an aluminum space frame structure, but like on the regular TT, steel is used as well. Thanks to the low and heavy battery pack, the vehicle features a low center of gravity and a 54 percent front/46 percent rear weight distribution.

Highlights of the concept include matrix LED headlights and two new assistance systems: One that scans intersections for potentially dangerous situations, and a second that connects to a municipality’s traffic-light system in order to recommend a perfect speed to reach the next light when it’s green. 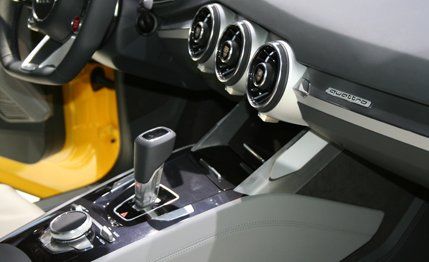 Inside, the interior is closely related to the TT’s, with a high-tech TFT display in front of the driver populated with the information that would normally be projected onto a central, dash-mounted screen—navigation, entertainment, etc. There is an abundance of cup holders, and the center console is reminiscent of those in Audi’s Q crossovers. The leather comes from Italian fashion brand Poltrona Frau, and as a gimmick to please enthusiasts like us, the trunk hosts a 1:8 scale RC car. (It worked.)

We’ll likely find out soon whether this TT, which makes us think of a four-door lifted Beetle, actually will be rushed into production.